I once had a co-worker who got married 3 times – to the same man. I’d met Leanne just as she was divorcing her husband for the 2nd time. “I should have known better,” she said with a sheepish grin.

When I ran into Leanne a couple of years later, I asked how she was doing. “I married him again,” she said, rolling her eyes.

“Will you get divorced a third time?” I asked.

She shook her head. “It’s too expensive. I’m not happy, but I can’t afford it.”

A few years after that, I thought of Leanne when I was involved in an on again/off again relationship with someone I couldn’t get along with on a regular basis.

What was our problem? Brad was like the little girl who had a little curl, right in the middle of her forehead. (When she was good, she was very, very good. When she was bad, she was horrid.) 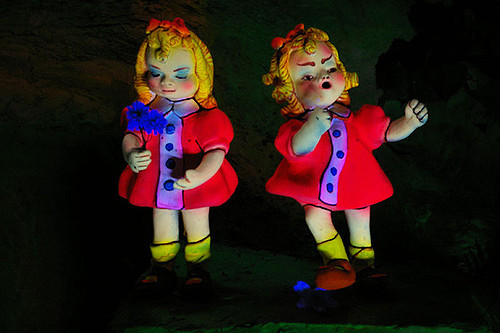 Brad made lots of excuses about his angry verbal outbursts. Not enough sleep. A high pressured job. A history of angry outbursts. (That should have been a clue.)

“I’m working on it,” Brad would say. I was foolish enough, or besotted enough, to buy it. (He was never physically abusive – which is no excuse.)

After a particularly bad breakup, Brad moved out of state. We both missed each other so much, we resumed our relationship from afar. It’s easy, in retrospect, to see that if it doesn’t work the first time, or the second time, it’s not going to work the third. But love (infatuation) is a type of madness. I’d learned that from being an English major.

Brad and I carried on a long distance relationship, seeing each other only twice a month. It was idyllic, as you can probably guess. Yes, I should have known better. My excuse? I was vulnerable. I was a divorced mother with two young sons. This boyfriend paid more attention to my kids than their own father did. If you want to win the heart of a mother, treat her children well.

At the end of the year, Brad moved back and we were engaged to be married. That’s when, as psychologists say, his behavior regressed to the mean. Which is a fancy way of saying that he went back to being his old self (only worse).

7 days before the wedding, Brad went into a rage. He screamed at my son and made him cry.

I canceled the wedding.

I paid the caterer, the florist, the DJ, and the photographer for breaching the contracts. It was worth every penny.

My little son, the one who had cried, told me wisely, “The next time, Ma, follow the rule: 3 strikes and you’re out.”

The next time, I decided, one strike and you’re out.

Many, many years after this debacle, a woman mailed me old photographs of myself, with an attached note that said:

I was cleaning out my house to get it ready for sale and I found these pictures of you in my ex-husband’s drawer. I thought you might want them. I know you were engaged to Brad a long time ago. I wish I had been as smart as you were and dumped him before marrying the man who became an abusive husband to me and an abusive father to our 2 children.

It’s all how you look at it. I ended up being the smart one.

Did you ever give a person one too many chances?

9 thoughts on “If it Doesn’t Work the First Time”